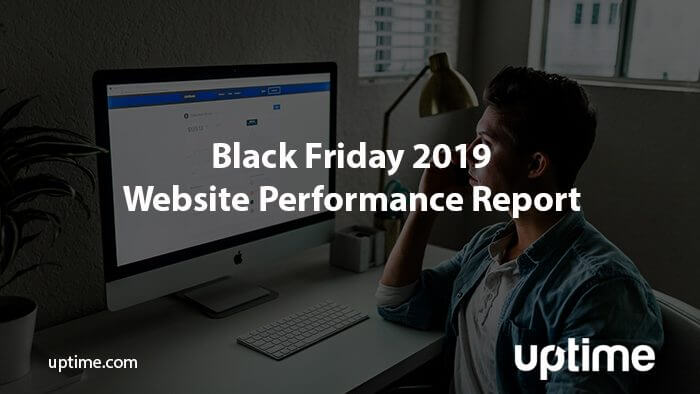 Tis’ the season for website downtime. No matter how great your web infrastructure is, many ecommerce sites experience downtime on Black Friday.

You’re not alone. New research by Google Cloud says that one out of ten retail executives reported downtime on Black Friday 2018, and four out of ten reported outages during one of the past three years.

This year was no exception. As online sales on Black Friday topped seven billion dollars, website outages started a day before the famous shopping holiday.

We’ll take a look not only at major outages, but also the performance of a handful of top shopping websites. We also ran our own tests to get an idea of how their performance stacks up.

Let’s start with a rundown of the major website outages from this year’s shopping frenzy.

Website outages started on Turkey Day USA as shoppers looked to swap info on social media and get a head start on shopping. Not only were retailers affected, but social media and banking suffered as well.

Both Facebook and Instagram went down on November 28. Though pictures of Thanksgiving meals went unshared until the site was back up, the material loss was for retailers.

Facebook accounts for over 80 percent of social referral shares to ecommerce websites. And since retailers can sell directly on Facebook, they are learning hard lessons firsthand about monitoring outside services for downtime to ensure smooth shopping.

Instagram also attracts buyers worldwide. Shoppable posts, which allow in-app purchasing through Instagram posts, are a popular weapon in the ecommerce arsenal. Without those perfectly styled pictures of their products, shoppers will have to look for products they love on Google.

However, the sites were back up by Friday and all was right in the world again.

Black Friday was a really bad hair day for hair care product company GHD. The site was down and customers looking to score holiday deals found an error page instead. Though we’re not sure how long the outage lasted, customers complained on Twitter they couldn’t access the site for the entire day. Others were unsure if orders went through even though the company debited money from their account.

The company assured shoppers that payment problems will be corrected and to email customer service with issues. That’s one busy support team.

Shoppers across the pond looking to cash in on holiday deals were disappointed on Thursday. The Bank of Ireland experienced problems with their online banking and ATM services for most of the day. The bank reported that debit and credit payments were still processing normally, and many branches stayed open late so customers could cash out at the counter.

Nordstrom’s deal site Nordstrom Rack experienced major problems on November 28. Users reported disappearing items from shopping carts and an inability to login. Though the company stated they fixed issues ahead of Black Friday, one angry shopper said all the items they wanted were sold out.

@nordstromrack Wasted THREE hours last night trying to check out. Stuff disappeared from my cart, couldn’t login, couldn’t check out. And now, 10 HOURS later, I STILL CAN’T GET THE WEBSITE OR APP TO WORK! Get it together!!!

The most costly outage of the weekend started on Thanksgiving and extended into Black Friday. Costco’s website outage cost the company an estimated $11 million dollars, as members were unable to access the website. To make up for the problem, the company extended many of their Thanksgiving-only deals into the next day.

According to Gremlin’s ecommerce downtime tracker, every minute of downtime cost the retail giant over $11K in sales.

Which Websites Were Included in the Black Friday Site Test

We used a combination of methods to choose which websites to monitor. In addition to looking at the highest ranked ecommerce websites on Alexa, we also looked at websites that had major issues last year, as well as popular US shopping websites.

Here’s a list of the websites and tests for each:

We used three different types of tests to evaluate website performance. Since we didn’t have full access to the websites we chose, we couldn’t run all three methods on every site.

Here’s a breakdown of what we did.

To check the response time of homepages and monitor for unplanned downtime, we created a set of HTTP/S checks that ran every minute. These checks verify the URL status code is OK 200, and provide response times in milliseconds.

It’s important to note that response time and load time are not the same. Response time indicates the amount of time the check needs to perform an HTTP GET request and receive a response from the server. An HTTP(S) check doesn’t actually load content, but reports how long it takes a site to verify the status code is OK 200.

We ran HTTPS checks for the homepages of the following websites:

To test the login functionality of ecommerce websites, we created a set of Transaction Checks. We began running these on November 1 to get a baseline for performance.

The check steps were as follows:

In addition to logging in, the Transaction Check provides response times. While we didn’t uncover any major errors during the login process, we used these response times to determine how sites were performing during the day.

The checks ran every five minutes for the following sites:

We ran two Uptime.com Speed Tests for each site from our East Coast US probe server on Black Friday. We used the second test for each site since best practice is running speed tests more than once.

The following sites were tested:

Speed Testing gives us several data points to compare. The results of these tests were used for:

These speed tests were only run from one location. Since they are synthetic, a variety of variables will affect actual user experience including network latency, connection speed and location.

Want to replicate these tests for your site? Check out Uptime.com free for 21 days, no credit card required.

We tested six websites for login response times. Our system logged into each website every five minutes with a Transaction Check.

The good news: the login process never failed for five of the websites. We were able to login to each website without an issue, except for Apple. Late night on Thanksgiving, we received a 503 error when trying to login. However, this could be explained by planned downtime to get ready for the shopping rush. We couldn’t find any complaints on Twitter of problems with the site.

Rounding out third place was Target. Their average response time on Black Friday was 8.57s, slightly higher than their average time for the month of 8.08s. 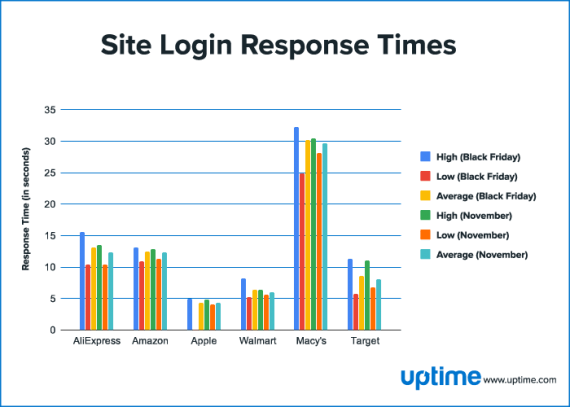 Though half of the websites tested had a response time of less than 10 seconds during the login process, the other half averaged closer to 15 seconds.

However, one website stood out from the pack with the slowest response time. Macy’s response times were over double the average for Aliexpress and Amazon. The highest time recorded on Black Friday was 32.36s, with an average of 30.15s. This is slightly higher than their November times. Their high for November was 30.46s and average was 29.69s.

The winner was Target, with an average homepage response time of 474ms. Their highest time recorded was 559ms, and the low was 435ms.

Rounding out third is Apple. Their average homepage response clocked at 658ms, only 5ms slower than Amazon. The highest recorded time was 748ms, and low was 637ms. 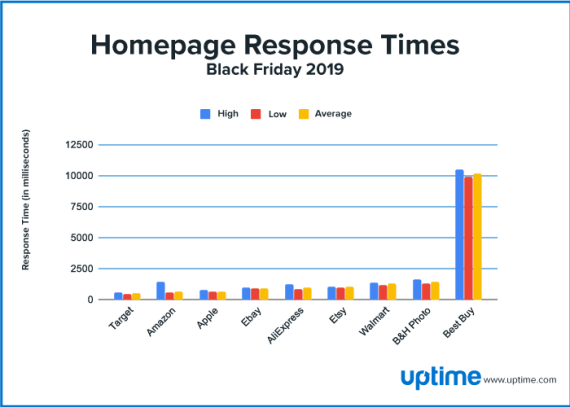 Surprisingly, Walmart was the third slowest on the list. The average time was 1.27s. The highs and lows weren’t much different. The highest recorded homepage response time was 1.33s, with a low of 1.18s.

We ran two speed tests on six sites. Many of the sites we used in other tests were blocking the Speed Test.

The fastest loading site overall was Apple, with a load time of 1.6s. B&H Photo and Video came in second at 3.7s. The slowest loading website was Walmart, with a recorded time of 42s. Number of requests and site size will be discussed in the following sections.

The HTTP Archive provides median numbers for various URL data points based on a sample of approximately four million mobile and five million desktop sites. According to them, the current median number of requests for a page are 75 for desktop and 70 for mobile.

The sites we tested had a slightly higher median of 94 requests. However, since ecommerce sites tend to be image heavy, this isn’t surprising.

The sites with the lowest number of requests were B&H Photo and Video with 36 requests, and Apple, with 52 HTTP requests.

On the high side, Amazon topped them all with 140 requests, and Walmart came in at 125 requests. Again, this isn’t surprising given the volume of content each site delivers.

The HTTP Archive reports the median page size to be around 1.9MB for desktop and 1.7MB for mobile.

This is especially critical for mobile sites. Browsers with older phones and spotty connections will struggle to load oversized pages quickly.

Of the six sites we tested, page sizes were very similar. The smallest was Ebay at 1MB. Etsy and Apple were tied with a size of 1.5MB. The largest page size was B&H Photo and Video at 2.1MB.

Despite the problems that always come with major traffic surges, the websites we tested fared pretty well.  There will always be outages on Black Friday, but major problems seemed to be relegated to only a handful of sites.

Another interesting note: all of the Speed Tests indicated that the sites had better mobile performance scores than desktop. With mobile sales dominating the season, it’s obvious that ecommerce companies are doubling down on mobile optimization.